St. Demetrios Citizens of the Year 2022 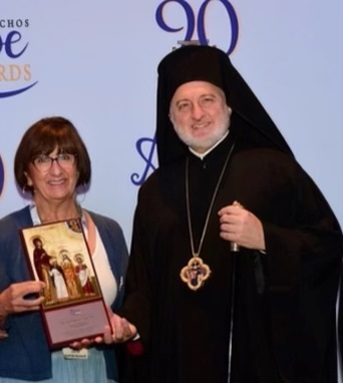 Mary Damascus - Citizen of the Year 2022

Mary has ably and enthusiastically led Philoptochos for the past several years. She has increased participation to over 140 people. She has brought forth new ideas, engaged larger numbers of women in projects, led a grant process and submitted the St Demetrios chapter for an award which it received at the Clergy Laity conference. Our Chapter received the Agape Award based on the many accomplishments of the chapter. The St Demetrios Chapter also received an award for the largest increase in members. Mary works hard to be inclusive, and it shows in the number of people who show up to volunteer. She has led, supported and encouraged multiple projects including Feeding the Hungry with a new group, Matt Talbot Center included this year along with St Martin de Porres Men’s Shelter, Jubilee Women’s Transition Center, Pantry projects providing non-perishable groceries to at risk families, grocery gift cards and NW Harvest monthly donation. Mary also supported a partnership with King County Sheriff’s Department to provide police with emergency kits to give to the homeless. Support also for Pregnancy Aid in the form of diapers, clothing and support to low-income mothers. The Chapter also provides emergency assistance for those in immediate need of funds. Mary’s enthusiasm and energy has motivated Philoptochos to achieve greater participation and outreach to those in need.

Chris Economou - Citizen of the Year 2022

Chris’s decades of volunteerism and leadership should be highlighted as an example to others. His is a face that everyone is familiar with due to his involvement in any group or organization he is asked to lend a hand to. Chris has contributed to our St. Demetrios community since the early 1980s (or before) via the Greek Festival and chairing the Gyro booth for more than 35 years. He has served as Parish Council member and an officer. For more than 25 years, Chris served on the Philanthropia Board and later the Foundation ensuring that the Adult home has been run professionally, efficiently and in accordance with the Health Department requirements. Chris has been co-organizer of the St. Demetrios Annual “Northwest Greek Open” which over more than 25 years has raised tens of thousands of dollars for St. Demetrios and our fellow local Orthodox parishes and organizations, as well as close to $100,000 for Boyer Children’s Clinic, and thousands for Mary’s Place and Vision House. Chris has served as president and main organizer of the local and district AHEPA chapter/district, has organized and assisted with conventions, various basketball tournaments and assisted in resurrecting the Sons of Pericles locally, with most local participants being St. Demetrios members enjoying AHEPA fellowship events. We congratulate Chris and sincerely thank him for his many contributions.

The leadership Achievement Award is given periodically to a parishioner who over many years has made significant contributions to the St Demetrios Community. This year Chris Pallis received this award. Chris has done a lot for St. Demetrios over many years. At least the last 50 years. Most recently he led the Centennial Event, a tremendous success. He has solicited funds for multiple projects including our mosaics which are 50% funded at this point.

Chris has served as GOYA President, Youth Basketball Chair, YAL President, National YAL Conf Co-Chair, 4-year OPA Ball Chair, Sunday School Teacher, 6-years on St. John The Forerunner Board, Parish Council for over 20 years including as President. Under his guidance as Parish Council President, he raised & funded the Courtyard & the Bookstore, Chaired New Landscaping & Lynn St. Brick Wall Entry. Chris has also served on the Metropolis Council & as Metropolis Treasurer. He was instrumental in the sale of the Thom Property and along with his family created the George & Venetia Pallis Youth Foundation. Thank you, Chris for your tremendous efforts on behalf of St Demetrios.

The Axios Award recognizes the contribution of a member who over the years not only demonstrates her clear love of the Church through consistent presence in worship, but in the case of Mrs. Babarakos, volunteering for any and all baking efforts. Her presence, always with a smile and a kind word, is welcomed and appreciated by many. Her stamina is amazing! We thank her for her service and her deep faith. Thank you, Mrs. Babarakos.

Baking is a huge process at St Demetrios. It happens not only at Festival time but many other occasions during the   year. Eleni and Nina have coordinated this effort for years. Their expertise, guidance and coordination of the baking makes our events so much more successful. Please join in thanking them for the many hours they contribute to baking not only pastries but prosforo and artoklasia.

Thank you to Georgene and Jim for the coordination and oversight of the restroom project. They brought their considerable talents in construction and design to the project making it the success it was. We thank them for the donation of their time and talents.

Special thanks to Jim Kost and Tedros Habte

Thank you to Jim and Tedros and all of the volunteers for the 2022 Greek Festival! It was great to have the Festival back and we would not have been able to be as successful as we were without Jim and Tedros, and everyone who participated!

Thursday of the 10th Week

Our Holy Father Clement, Pope of Rome; Peter, Archbishop of Alexandria; Hermogenes, the Martyr; Afterfeast of the Entry of the Theotokos into the Temple; Philoumenos and Christopher the Martyrs